Coaching for Hope to host The Football for Good Awards 2015 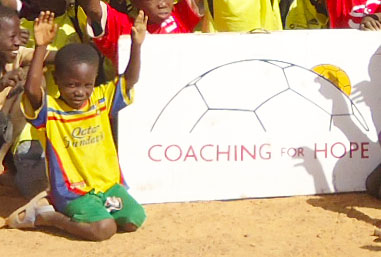 This year marks the 10th anniversary of the Coaching for Hope programme. That's why we're celebrating with the Football for Good Awards to showcase the positive impact football has had in communities around the globe.

We believe that sport has the power to change the world, that football is an incredible force for good. In the UK and communities around the world football is changing lives and making a positive impact. Yet so much of this amazing work goes unrecognised. That's why Coaching for Hope and Skillshare International are hosting the first Football for Good Awards. The first awards exclusively to focus on the good things done using football.

It's a chance to celebrate the good that goes on both on the pitch and behind the scenes, at all levels of the game.

Nominations are now open to all clubs, players, coaches and organisations to enter one of our eight awards categories. From the Player Imapact Award to Champion of the Women's Game, there's plentry of scope for anyone to enter.

Hosted by Sky Sports' Ed Chamberlin, the awards ceremony will be held on 2nd December at the Old Billingsgate Vaults in London.

To find out more about the nominations process and to buy tickets follow the link here.